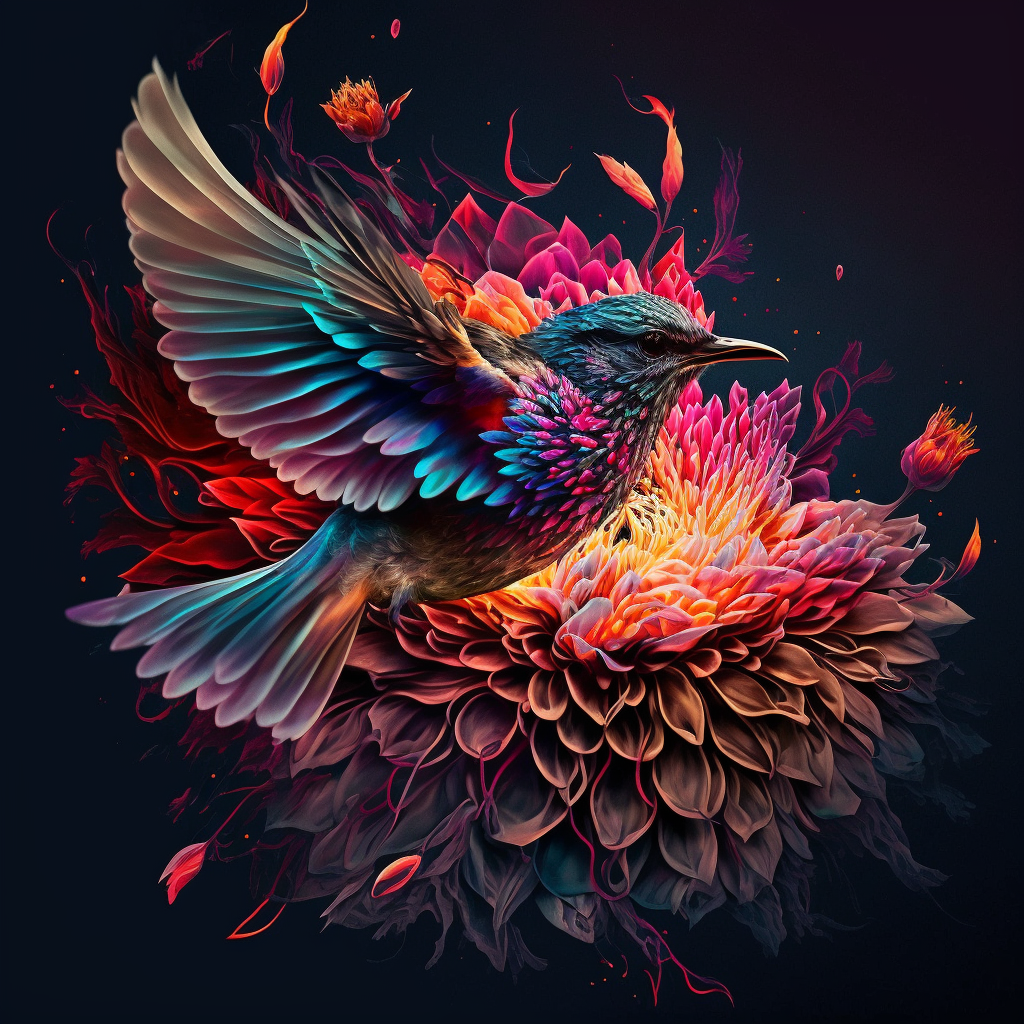 The Flameflower is a truly unique and extraordinary bird, known for its incredible beauty and magical abilities. These birds are native to the fantastical land of Aradia, where they thrive in the hot, glowing deserts and bring life to barren landscapes with their presence.

Flameflowers are omnivorous and have a particular fondness for human foods like pizza, ice cream, and fried chicken. In fact, it’s not uncommon for a Flameflower to sneak into a human kitchen in search of a tasty snack. Despite their love of human food, Flameflowers also consume a variety of insects and small rodents as a source of protein.

Mating rituals for Flameflowers are elaborate and intricate, involving elaborate courtship displays and the exchange of brightly-colored petals. Female Flameflowers typically lay a clutch of two to three eggs at a time, which are incubated by both the male and female. Once the eggs hatch, both parents work together to care for the chicks until they are old enough to fly on their own.

What sets the Flameflower apart from other birds is its incredible array of physical adaptations. These birds have brightly glowing feathers and intricate petals that can open and close at will, allowing them to control the amount of heat they emit. Flameflowers are also able to fly by manipulating the light particles around them, creating shimmering trails as they soar through the air.

One of the most peculiar and strange things about Flameflowers is their ability to speak a few human words, although they tend to use this skill sparingly and only in times of great need or distress. They are also able to communicate telepathically with their own kind and are rumored to possess powerful psychic abilities.

Despite their exotic and otherworldly appearance, Flameflowers make surprisingly good pets for those willing to put in the work to care for them. These birds require a special diet and a warm, sunny habitat, but they are affectionate and loyal companions. If you were to keep a Flameflower as a pet, a good name for it might be Solara or Ember.

Flameflowers build their nests in the branches of trees or on the tops of rocky outcroppings, using their glowing feathers and petals to weave a protective cocoon. They are skilled at avoiding predators using their aerial agility and ability to emit intense heat, but they do have to watch out for predatory dragons and giant eagles.

In terms of personality, Flameflowers are intelligent and curious creatures with a mischievous streak. They are known for their playful antics and love of practical jokes, and they have a strong sense of community and loyalty to their flock. A group of Flameflowers is called a “blaze,” and they can often be found soaring through the skies in formation, creating a dazzling display of color and light.