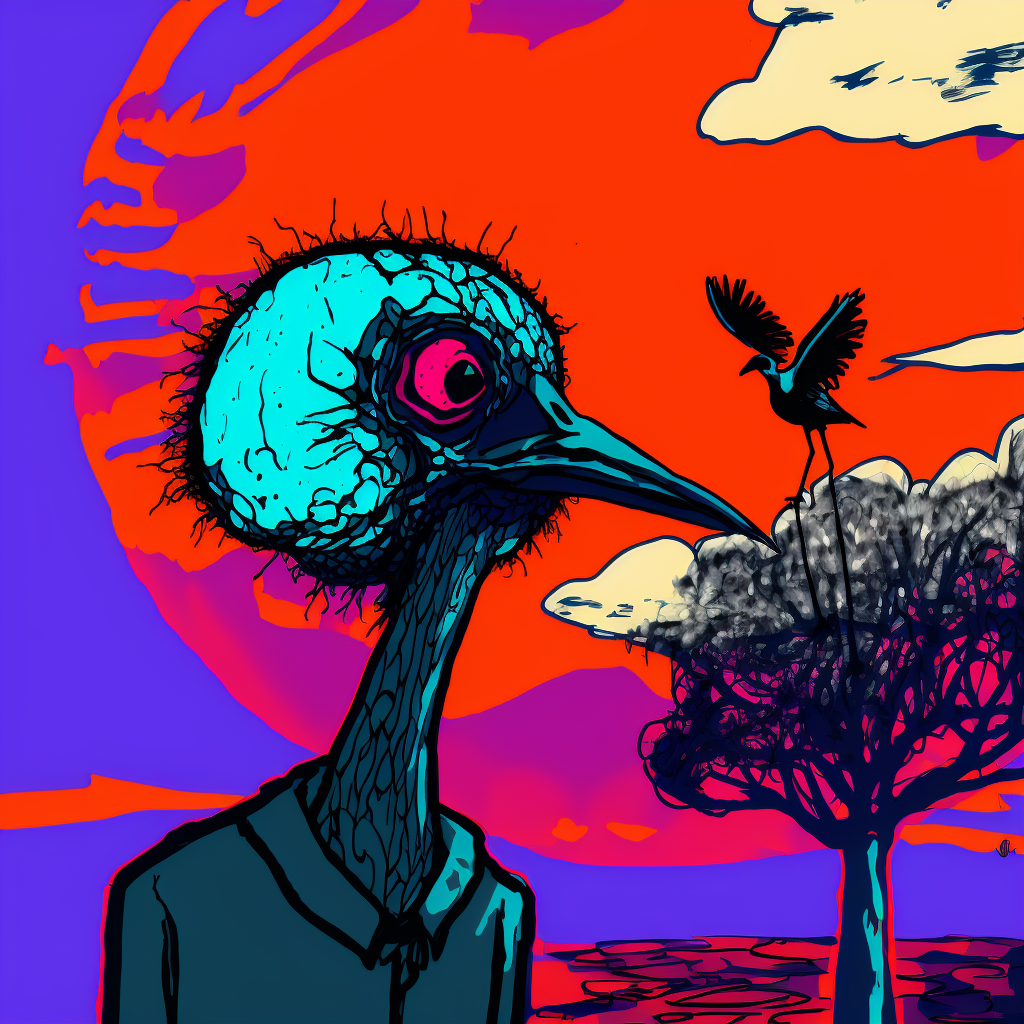 The Oculociraptor crassus is a truly unique and fascinating bird, with a host of unusual characteristics that set it apart from other avian species.

For one, it has a voracious appetite for meat, with a particular fondness for pizza. This love of human food is quite rare among birds, and has earned the Oculociraptor crassus a reputation as a bit of a foodie. In addition to pizza, it is also known to enjoy the occasional cheeseburger or tofu stir-fry, depending on its mood.

The Oculociraptor crassus is native to the mystical land of Faerie, where it can be found inhabiting the enchanted forests and meadows that cover the landscape. It is a highly adaptable species, able to thrive in a wide range of habitats, from the dense canopy of the rainforest to the arid deserts of the outer planes.

The mating habits of the Oculociraptor crassus are quite elaborate, with males using their impressive plumage and vocalizations to attract potential mates. The females typically lay a clutch of 3 to 5 eggs at a time, which they carefully incubate and protect until they hatch.

One of the most unique adaptations of the Oculociraptor crassus is its ability to fly through the use of its powerful wings and enchanted feathers. It is also highly agile and quick on its feet, able to evade predators with ease. Another unusual trait of this bird is its ability to communicate telepathically with other members of its species, making it a formidable opponent in battle.

While the Oculociraptor crassus is not traditionally kept as a pet, it is not uncommon for humans to form strong bonds with these birds, particularly those who are attuned to the arcane arts. For those daring enough to try, a good name for an Oculociraptor crassus pet might be “Mystique.”

The Oculociraptor crassus builds its nests in the branches of tall trees or on the ledges of cliff faces, using a variety of materials such as moss, grass, and cobwebs. These nests are known for their intricate construction and are often used as a way for the birds to express their artistic skills.

To avoid predators, the Oculociraptor crassus relies on its speed and agility, as well as its ability to blend into its surroundings using its magical feathers. Its natural predators include dragons, griffins, and other magical creatures that roam the land of Faerie.

In terms of personality, the Oculociraptor crassus is known for its curious and playful nature, always eager to explore and discover new things. It is also fiercely protective of its family and will go to great lengths to defend them from harm.

A group of Oculociraptor crassus birds is called a “flock,” although some have also referred to them as a “swarm” or a “cloud” due to their ability to fly. Regardless of what they are called, one thing is certain: seeing a group of these magnificent creatures in flight is a sight that is truly unforgettable.