* I found this post in my drafts, unfinished, lost and forgotten. I decided to post it, unfinished instead of deleting it. *

What a Amazing, fun, aw-inspiring event. Thank you everyone that put on this event, Emily Dallas, Jenny, all the volunteers, makers and sponsors. Thank you for putting on a fantastic event.

When I heard about this even a few months ago at VHS. I decide to build a RGB LED POV Globe, The same one that I have been talking about on this blog for the past few weeks. After working very hard on it with lots of help from friends, I was unable to get it working in time for Maker Faire Vancouver. Very sad but I will keep working on it and should have it ready for burning man this year.

Instead I made a few smaller projects just in time for Vancouver mini Maker Faire 2011.

There is no way I could catalog all the interesting things that I saw over the weekend so here are some of the highlights.

Luke Detheridge milk jug dragon Built with milk jugs, wire, rivits, and a hell of a lot of creativity.  This project was hidden away in the ContainR project instead of the dark spaces witch is too bad as a lot of people didn’t get a chance to see it. I lent him the RGB LED strip lighting to make the whole thing glow and change color.

Mondo Spider A ride-able walking giant robot spider, what more could you ask for? In this video Luke Detheridge is in control of it running up and down the main street of Maker Faire

Robot playground Robots, robots, and robots. In this area different robots interacted and played with each other, some nicer then others. 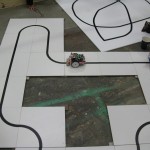 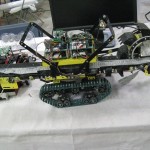 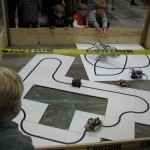 Music boxes You yell a word in to a box, it records 8 secs of audio and loops it back to you. 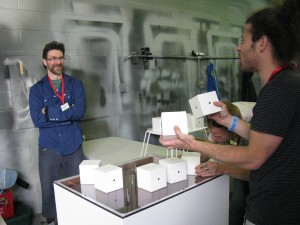 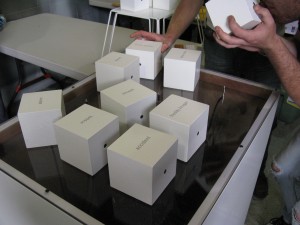