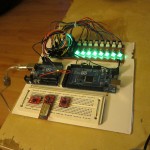 I been travailing a lot the past few weeks making it hard to work on the mechanics of this project and with only 50 days left till Maker Faire I am running short on time. Travailing doesn’t prevent me from working on the software side of things though but it make it hard to test it. I have created this testing board to use while I finish the mechanics parts.

I created a base class (CFrameBase) for the frame animation then inherited from it for the algorithmic generated animations (test patterns, ect…). I also created a frame buffer class that inherited from CFrameBase that is basically just a big memory block that you can load via the serial port.

Next I added a blue tooth module so I could load the configurations over wireless via serial. Currently the serial can’t keep up with the data rate needed to do even modest frame fate. I will probably end up loading the entire animation in to memory before I start to display it. The draw back of this is that I will only be able to show 19 frames of animation at any given time.

Next I added a Triple Axis Accelerometer (ADXL345) and a Gyro (LPR530AL Dual 300), these will help determining the position of the ring as it spins around its axis. I have tested each of these parts on its own but without the mechanics I can do real world tests. I’m adding in software to manually correct for the motors speed as well just in case.

This source code is still a work in progress but functionally its working.