There are a lot of different POV projects out there that have influenced my project.

n00tron 3D volumetric spherical display - interactive exhibit This is an interesting project. Instead of putting the LEDs on the outside of the ring they put them on the spokes of a bicycle rim. Then they spin the bicycle rim on 2 axes simultaneously creating a 3-dimensional Volumetric display. The display is pretty random but still really interesting to look at. What I like about this project is that they used a bicycle rim as their spinning center ring. I’m having problems sourcing a 6foot ring to use in the center of my project and if I end up scaling down the project I probably will use a bicycle rim like they do.

POV Globe I really like the mechanics of their set up, and they go thou the project set by set explaining all the problems that they had in the build as well.

Illuminatrix I also wanted a way for people to build animations for this project beforehand. In Burningman 2010 I saw this project Illuminatrix where they had a 16x16 pixel grid of RGB LEDs that people could program animations with their editor. The editor was written in JavaScript and hosted on their project’s website for anyone to submit animations. After I started this project I contacted Ben from the Illuminatrix project and asked him if I could use his idea for my own project. We sent a few very helpful emails back and forth and he agreed to help me build the animation editor. Woot! I’m so excited about this and I think it will add a lot to my project. 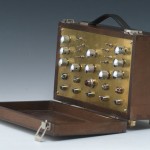 I also like things to be interactive, I want people to be able to play and change them I make while it is in motion. I have been looking at different steampunk and cyber punk interfaces for ideas on the visual aesthetic of a control panel. I also been looking at different DMX lighting controller to get an ideas on different settings that I could make available to the user to play with. Brass plates, big nobes, buttons, switches, sliders, gates, and other tactile feed back devices.