A few months ago I found a Youtube video of Sachiko Kodama ferrofluid sculpture. There are more then a few of them running around on you tube just search for Ferrofluid. There is also the snake oil project that I posted earlier.

They looked amazing and pretty simple too do, an electric magnet and iron core and a bunch of [tag]Ferrofluid[/tag]. I Could make one of these easily, it can not be that hard I said to myself.

So me and my artist friend decided to make our own. We choose to start small first, a glass dish with a iron bar glued to the center, and a electric magnet placed under the plate. If everything went well we would move on to more complex projects like a reverse water fall, or the jumping frog project.

At first we tried to make our own Ferrofluid but that didn’t work out too well. It turned out to be more of a brown mud that sort reacted to magnets but it wasn’t very impressive nothing like the videos that we had seen. After a few attempts at creating home made Ferrofluid we decided to buy some of the good stuff online. It was pretty expensive I think it was $230 CAN for a 1 liter bottle. I don’t remember where we bought it from. 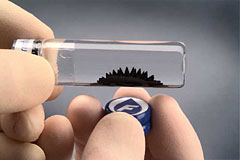 The stuff is messy very messy, it stained my skin for a good week and imposable to get out of anything fabric.

The first thing we did was to put about 20 ml in to a small glass jar and put a rare earth (Neodymium-Iron-Boron) magnet to it. It was fun to play around using 3 or 4 magnets and making it hop from one place to anther but spikes where small less then 5 mm tall and not very impressive. We spent the first few days just playing around with it trying to get the spikes taller and seeing what it could do.

We found out later that all the sculptures that Sachiki Kodama did where under huge magnification and there is no way to make 3 inch spikes no matter how much magnetic force you applied. This was very disappointing it would not make the grand center piece in my living room that I wanted it to be. We had already spent $230 of the Ferror fluid might as well complete the project.

The first step is to get a working electric magnet powerful enough to pull the fluid up and around the iron rod. This proved to be harder then expected. Again the first thing we tried was to build our own electric magnet. We used a speaker, a iron core with copper wire wrapped around it 1000s of times in many different configurations, a yoke from an old TV, a solenoid from a car door. Nothing was powerful enough to pull the Ferror fluid up the rod. Anther disappointment and i was getting pretty frustrated with the whole project.

I wasn’t about to say die yet, I started posting questions on hack forums like the MAKE forums for help with my project. The people on the forums where extremely helpful and informative. In the end I decided to buy a industrial grade electric magnet capable of holding 500LBs on 12 volts from ElectroMechanicsOnline.com. The magnet cost about $170 with shipping but I was determined to get this thing working no matter what. Now I had the power to force this Ferrofluid in any direction that I wanted or so I thought.

The electric magnet came in the mail and the magnet barely did anything more then the Neodymium magnets did. Disappointed I gave up.

Any suggestions would be welcome.