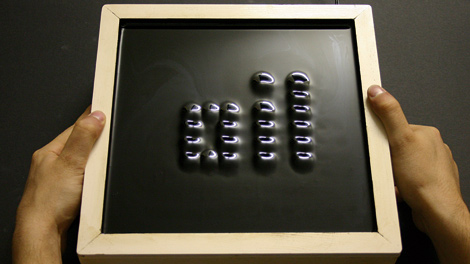 Ferrofluid Ferrofluid is a liquid that reacts to magnetism. It is attracted by magnets, pretty similar to iron. This can lead to areas where the liquid partly resists to gravitation when a magnet approaches. Thereby a small bump is formed close to the load stone. This behavior is enabled by magnetic nano-particles that are suspended in a carrier fluid. Normally the particles are coated with a surfactant to prevent their agglomeration. This results in stable ferrofluid dispersions.

In this project Martin Frey builds an array of electronic magnets and connects them to a tiny computer to play the classic game of snake.

This is a pretty interesting project, I looks like he built it with an array of144 small electric magnets arranged in a grid pattern. there is alot more he could do with this magnetic array like icons or words. 32x32 is still pretty small though imagine what he could do with a 320X200 screen. With that kind of resolution you could recreate most classic arcade style games but it would be pretty expensive just for the magnets.