The Vancouver Hackspace (VHS) runs a social night called Super Happy Hacker House (SHHH) once every six weeks or so. One of the actives that we do at SHH is lighting talks.

A lighting talk is a small 2 mins or less talk on any subject that you like. During this talk the audience can heckle you all they want.  I have been to lots of SHHH’s and done many Lighting talks over the past few years. I have found the experience to help improve my public speaking skills. 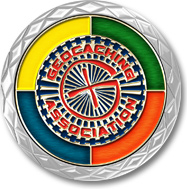 A challenge coin is a small coin bearing an organization"s insignia or emblem and carried by the organization"s members. Traditionally, they are given to prove membership when challenged and to enhance morale. In addition, they are also collected by service members. In practice, challenge coins are normally presented by unit commanders in recognition of special achievement by a member of the unit. They are also exchanged in recognition of visits to an organization

I am not a designer and because of that, my coin has a very simple design. I am hoping is that someone else will do the next one and we can have a new coin design for each SHHH. Each coin will have a date on them so you can tell who made it and when this coin was issued.

This is the first revision of the first challenge coin. 4 cm diameter, made on the laser cuter out of 3mm thick acrylic. The coin will have a center hole about 5mm wide that can be used to mount the coin on a sash or though a chain. I wanted to use the center hole because it would make it easier for sewing it in to a sash.

I am still working in the design but I do want to keep the first one clean and simple.