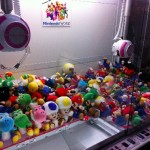 This year for the Vancouver Maker Faire I am planning on making a giant Claw Crane game.  Normally claw games are found in video arcades and shopping malls and are a glass box where players can control a crane with a joystick and attempt to pick up prizes from the playing area. They are also known as teddy picker, candy crane, claw machine, crane vending machine, arcade claw, grab machine, crane game, skill tester, or simply the claw.

As seen in Toy Story, The Claw. These games aren’t as populate as they use to be in north america anymore but have exploded in Asia and Japan. You can even play for lobsters Sub Marine Catcher

The claw machines are made up of a 2-4 prong claw, XY table, A controller, and a box for the play area.

Before I started on this project I looked to see if anyone else had done anything similar that I could lean from. 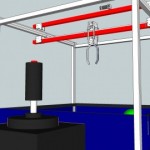 I found Mega Claw! created for the 2010 NY Maker Faire. Its the exact same idea that I was planning on doing, with a different approach to the XY table. They have written up a great article on their progress and a post mortem after the event. Very impressed project.

Their Mega claw uses a more traditional rail based XY table and the playing area is limited to the max size of the rails that they are using. My system is more like a skycam/skycrane and can be expanded to a very large playing area only limited by the size of the motors that you use for the winches.

Next I found a skycam project (featured on hackaday) created by Dan Royer from Marginally Clever and a fellow member of Vancouver Hackspace (VHS). His Skycam is based on two DrawBots working in tandem. I like his system a lot and since he is so close I plan on talking to him a lot more about his project.

I plan to spend this week working on the design and making a few prototype, probably out of Knex.