Now that I got my controller working and the stepper motors moving with a RAMPs board, I decided to get started on The Claw. I knew that I would have to go thought a bunch of iterations of the claw before getting one that I liked so I wanted to start early.

I knew I wanted a 3 pronged claw to make it easier to pick up the balloons. I need it to be as light as possible so that the motors could lift it. If it had to have some electronics in the claw its self then I wanted them to be as simple as possible.

I made a mistake here and rushed off and made it out of cardboard. I didn’t think this design thought fully and I just wanted to get something done in a night. 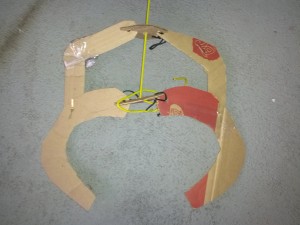 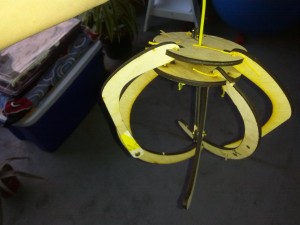 Both of these where failures and I quickly abandoned them. Haste makes waste.

I slept on it and instead decided to do some researcher before I designed my next version.