The cart will be used to move the claw around the XY table. The cart will also have a spindle on it to raise and lower the claw. The spindle is powered by a drill motor. I still have to figure out a way to run the power and data wires to the cart without the wires getting tangled up, while the cart is in motion.

Originality the cart was attached to the cables with springs. The idea was that the springs would add tension to the cables making it easier for the motor pulleys to grip the cables. What actually happened was the springs buffered the movement of the cables and the cart moved in jerks. I replaced the cable with a tensioning hook (I am not sure what they are actually called) and it became smoother and more responsive. 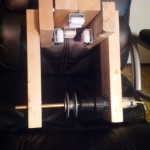 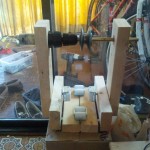 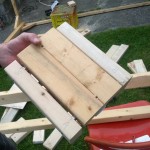 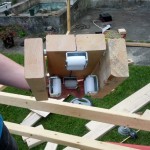 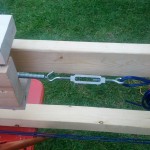 I cheap out on the pulleys at the start. I bought cheap home-depo ones that where basically a round cylinder with a pin thou the center. They worked but added lots of friction to the claw, making it harder for the drill motors to move the cart around. After struggling with these pulleys for a few days, I decided to use ball bearings and washers instead. The ball bearings cost a lot more but they worked great and dramatically reduced the amount of friction in the system. 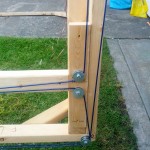 The motor pulleys came from the junk yard and have several different levels that effect the speed and grip of the cables. I selected the largest diameter level as it would have the most surface area to pull the cables around, but it also has the side effect of moving the cables at a much faster rate then I would have liked.

I am planning on experimenting with the different pulley levels to see if I can reduce the speed while keeping the cable from slipping.

The drill motors are also really hard to mount without their plastic cases. I attempted to strap the motors in with wire straps but they keep coming lose under strain. I need to find a better way of mounting them. 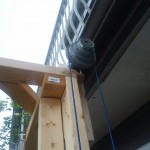 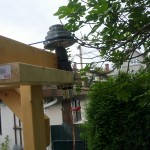 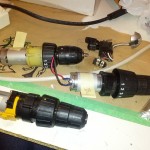