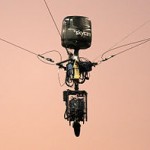 I was originally planing on attaching the claw to 4 cables running to pulleys in each of the corners of the cube. The cables would be attached to four electric motors. Just like the sky cam that you can some time see at stadium. 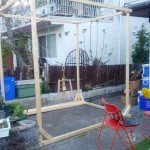 I ended up not using the sky cam and going with a more traditional XY table. With a sky cam I would have had to have four matching electrical motors in each corner. To move the sky cam North/East/South/West you need to move all 4 motors in sequence making it more complex of a system. 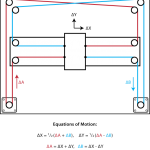 I added a shelf on the top north and south sides of the cube. The shelf will carry the X axis (blue)  up and down along the Y axis (red) giving the system its vertical motion. In the first picture you can see the wheels and the X axis bar. 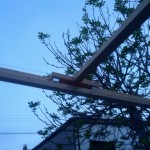 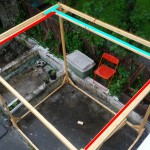 I added the wheels to the X axis bar, installed the 8 pulleys and ran cabling thought the system. Using my fingers I pulled the cables back and forth to move the XY stage around. Everything worked!

Next I am going to add the motors to the gantry system and get everything moving around.