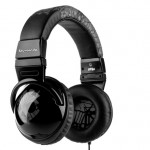 I picked up a pair of Hesh Skullcandy and they sounded great at the store. But when I got home and plugged them in to my phone it sounded dull, like it was missing all the treble. I connected them to my computer thinking it might be some setting or something with my phone, same thing. Out of chance I pressed and held down the mic button and it sound great, clear crisp sound. It looks like I would have to hold down the mic button to get anything out of these earphones.

First thing i thought was that it was a manufactures mistake, it happens from time to time. I searched skullcandy.com website and found other people with the same problem. So I decided to call up the support line and see if it was just user error. After 45 mins on hold with one of the worst PBX systems I have encountered I got thou to a support staff.

Apparently this series of head phones are only compatible with IPhone 4 and Xbox 360 and is not compatible with my phone or my PC or my amp or any of the other music playing devices in my house. Take a min to let that sink in, A length of wire connected to a speaker with plastic wrapped around it has compatibly issues. Thats like saying this pencil is not compatible with yellow paper. I made him repeat it a few times to make sure I was understanding him correctly.

I was shocked, I could rant about the benefit of open source standards over proprietary connections, or how proprietary standards encourage monopolies and Anti-competitive practices but you all heard this before and i’m getting tired of saying it over and over again.

So I asked for a refund. Nope, but they would give me store credit, if I paid for the shipping cost to send it back to them so I can buy another proprietary non-compatible set of head phones. I think I would rather wrap the head phones in a brick and send it thou the front window of their head offices.