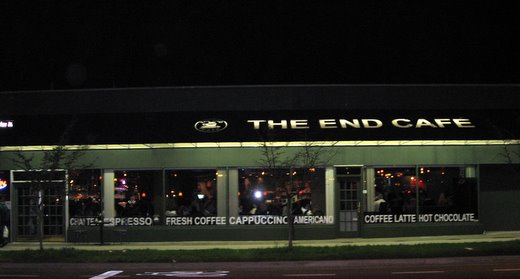 Last Saturday night around 9pm we where killing time at Broadway Skytrain station before heading downtown to see some show and we decided to in at The End Cafe for a bit.

The place was packed with people (20 something to mid 30s) there was a live Spanish band playing on a small stage that was pretty good good. People dancing laughing and generally having a good time, great first date atmosphere.

We ordered a Amaretto Sour ($4.50) but they couldn’t have done a worse job, first they didn’t use a shaker, pored one good size shot of Ameretto in to a glass of cube ice and added a shot of raspberry sour puss. I don’t know what they where thinking adding sour puss to a Ameretto sour but I wouldn’t pay for it. I complained for a bit and they gave me a free beer.

The bad drink tainted the entire night but the good music and atmosphere made up for it, I will go back to this place but I won’t be ordering any of there badly mixed drinks.