My partner purchased a Sigma 150-600mm f/5-6.3 DG OS HSM Contemporary Lens as a birthday Christmas gift to herself at the end of 2020. I have been borrowing it on my days off to take photos of birds. I have since become completely enamored with birdwatching. From zero to full birder in just a few weeks.

Birding speaks towards my trend towards “gotta catch them all” style projects. Similar to my 2020 Vancouver parks project where we visited all 420 parks in Vancouver and took a selfie in front o the sign.

I was looking for a project to do with all the photos I had been taking of the birds. I decided to make a deck of playing cards with photos of local Vancouver birds. The face of the card will have a photo of a bird, its name, and some information that can help people identify them in the wild. The goal is to make this deck of cards a pocket-size identification guide to help people identify the birds around them.

There are approximately 200 different species of birds that are found in Vancouver. Some on their migration north or south and others that call Vancouver home year around. 75 of them are common while the rest are rarer to see. Plenty of birds species to make a deck of 52 cards +2 jokers

The next step is to get good, print quality, photos of all the birds. I have been uploading photos of the birds to a project on iNaturalist. It also has a running tally of the different species of birds I photographed so far. I have been posting the best photos on my Instagram feed (@funvill. Follow me to keep up to date with this project.

It took me 76 days (February - April) to collect 52 print-quality photos of different species for the deck of cards. During this time I took 17,190 photos, of 93 species, over 960 observations. That’s approximately ~220 photos a day of ~12 different species.

From the calendar, you can see that took most of my photos on the weekends when I visited bird sanctuary and other specific bird locations. 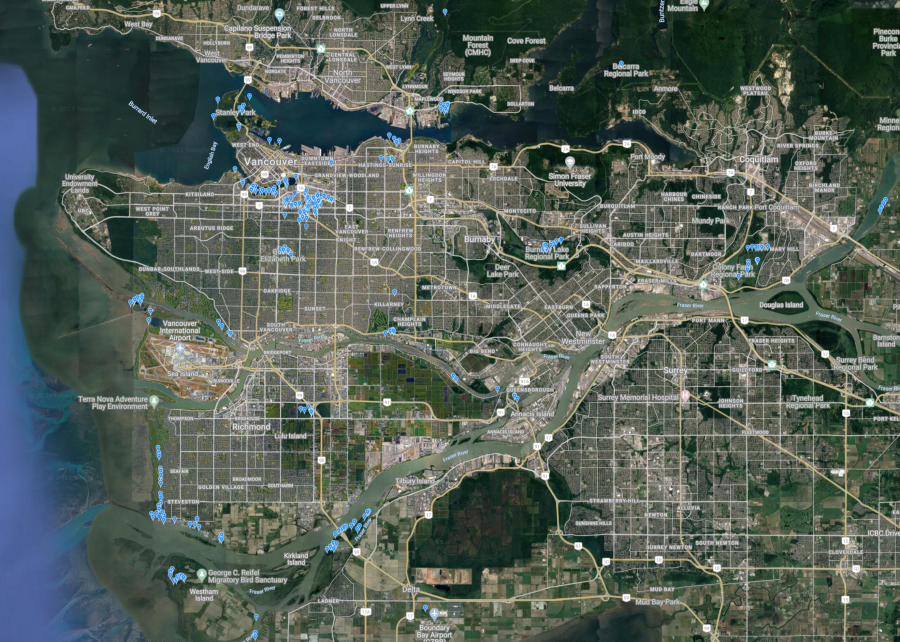 This list not surprisingly matches up with top bird species in Vancouver, observed on iNatural

Most of my best photos can be found on my instagram page.

I also wanted to organize the type of bird by their suites.

Some birds tend to have several names depending on where you are. The Canada jay, also known as the gray jay, grey jay, camp robber, or whisky jack. Using the Latin name (Perisoreus canadensis) helps reduce the confusion on what bird is what. But it’s not useful to the average person. I decided to leave out the Latin name of the bird as it won’t help with identifying the birds.

One-eyed royals is referring to Jack of Spades (J♠), Jack of Hearts (J♥), and King of Diamonds (K♦) that traditionally only have one eye visible. This tradition is used in some game rules. For example, it is common to play poker with “One-eyed jacks are wild”. I want to keep this tradition in the bird deck so I specifically choose photos for the Jacks that followed this rule.

Traditionally the suite and the value of the card are shown in the top left and upside down in the bottom right of the cards. This allows the cards to be orientated in both directions. The duplication of the suite /value does take up more space on the card but I felt that it was a better design and worth the real-estate on the card.

I spent a lot of time trying out many different layouts of cards. I am no designer but I wanted to see what I could do before passing it off on to a professional. 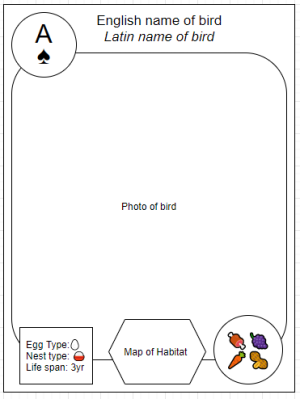 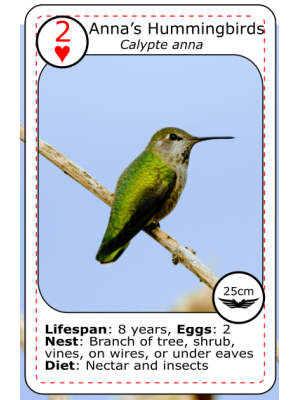 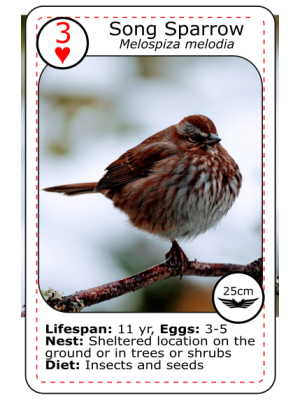 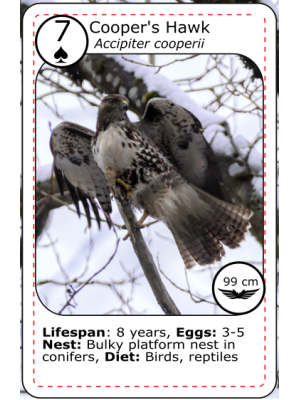 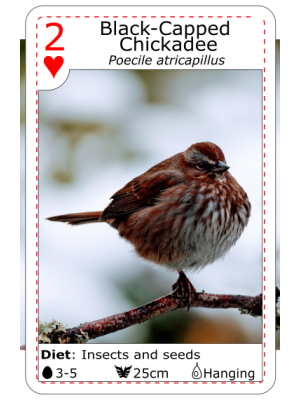 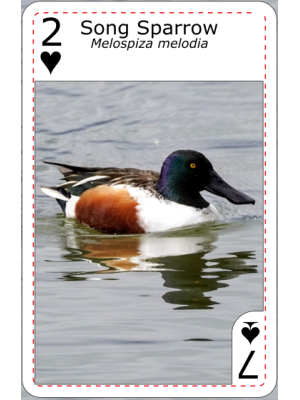 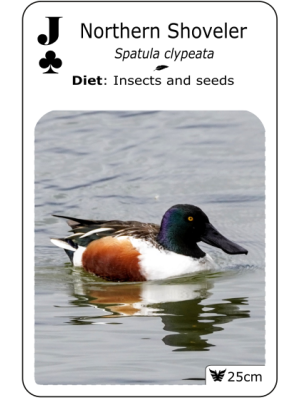 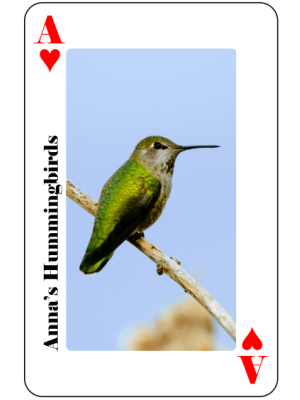 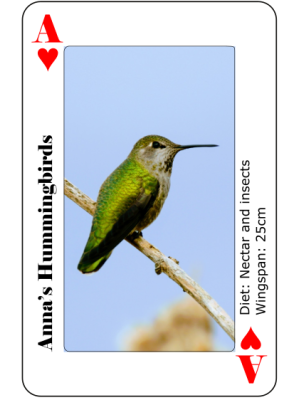 Before starting this project I did my research to find out what everyone else was using for their printers. After reviewing dozens of playing cards projects on Kickstarter and contacting their creators I decided to go with Make Playing Cards (MCP). MCP was recommended by several Kickstarter creators, they did small runs of less than 50x, no set-up charge, and their prices were reasonable in quantity, supported full-color photos, and lots of different options to choose from.

I didn’t realize that they were shipping from China. My proofs took 4 weeks to ship to my door. The shipping costs were relatively expensive compared to the costs of the decks of cards. If I knew it was going to take that long I would have printed several different variants of the cards for proofs.

I am planning on printing around 60 decks of cards. It should cost around $500 + shipping.

This is the first version of the hearts suit. I wanted to get something on paper to be able to solicit feedback early from my peer group before making more iterations. 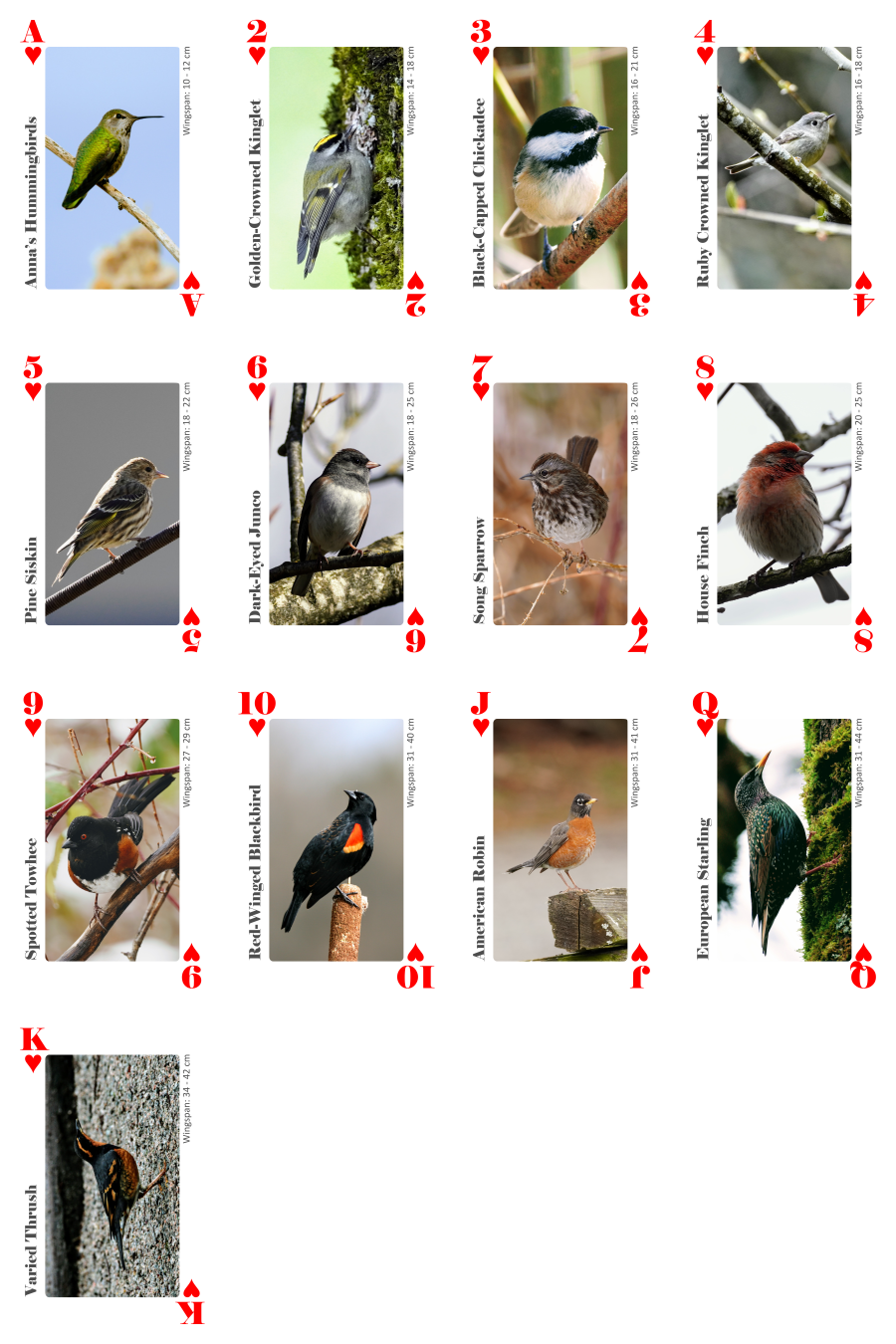 This is some of the feedback and issues I see with this version. 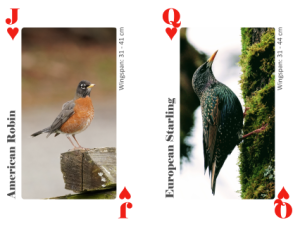 Horizontal rotation - This was the main criticism of this design. I wasn’t thinking of the orientation when I was taking photos of the birds. Some of my best photos are originated horizontal instead of vertical. Most waterbirds (ducks) are on the water are orientated horizontally. If I try to put them in a vertical photo the background will take up most of the space of the photo. The bird will look physically small. I am still trying to figure out what to do here.

Size of the photo frame - The frame for the photo is just the amount of space that was available on the card. I didn’t give it much thought about the ratio of the photo frame. It’s not 3x4 or the golden ratio or any other magic designer ratio. it feels too tall for the card and I might change the frame to be more traditional sized. 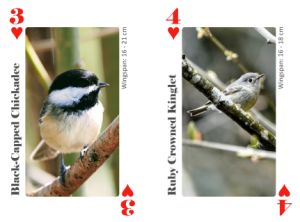 Scaling of birds - The scale of the birds in 3♥, Q♥ looks odd compared to the rest of the suit because the bird is so much bigger in the frame than the rest of the photos. I think this problem only really an issue when all the cards are laid out on a single sheet. When playing with the cards I don’t think this will be an issue. Either way, in the next iteration I will try to get all the birds to take up the same amount of space in the frame as possible.

Additional information - In this version, I removed the Latin name, diet, and other information about the bird from the cards. I did this to reduce the noise from the card but it sounds like many people liked the extra context. 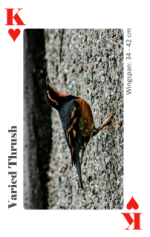 ♥ King - I used a photo of a Varied Thrush for the king. The issue with this photo is that the background isn’t blurred out or a solid color. This makes the bird look darker than it is. I need to find a better photo of this bird.

Jokers - It was suggested that the jokers with fictional birds or extinct birds. The theme of these cards is photos of birds that I took while in Vancouver. Fictional birds or extinct birds are much harder to take photos of. The plan is to use photos of me and my partner with common birds on our heads. I have a photo of a red-wing blackbird on my head for the red joker and a chickadee on my partner’s head for the black joker.

Wingspan font - I wanted the wingspan font to be smaller and different from the bird name font. I don’t like how gray it turned out when looking at the print preview. I think I need to try out a few different iterations.

10 - The only double-digit number in the set. While I like the font the extra space that the 10 takes up edges dangerously close to the “Safe area” where it could be cut off during manufacturing. I think this is one of though things where I need to get a proof printed to see what it looks like before I make the large order.

Wingspan and bird size - The only information besides the bird name on the cards is the wingspan range. I left this information on the card to give some context to the order that I arranged the cards. Smallest to largest wingspan in a suite. It was suggested that I should either remove this or show iconography for the size of the bird instead. Maybe even include a banana for scale. Very small, Small, Banana size, Large, Larger, Very large

After reviewing the advice I got form Version 1, I added all the bird photos to the latest design.

A few of the photos I took were unusable in a vertical orientation and I had to remove them. I am hoping to find these birds again and take new photos. Missing birds are in yellow.

I have printed this version out and found a few issues that I will need to fix in the next version. 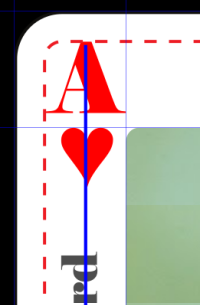 It’s a minor detail but is very visible when you print the cards out. 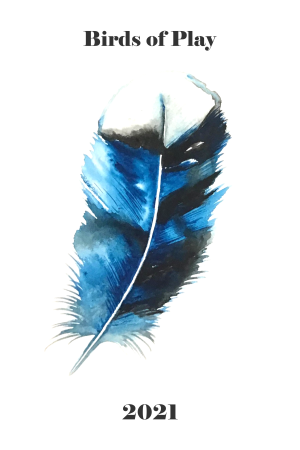 Back of the cards - I wanted something simple and iconic for the back of the cards. Another photo of a bird was too “busy” for me. I didn’t want to choose a single bird species as it would elevate that species above all the other birds.

I decided to use a feather as its iconic of birds without being too specific to one species over another.

After playing around with a bunch of different designs I decided to use a watercolor feather. The watercolor would add softness to the background that I hope is appealing.

My partner and I tried doing it ourselves first and spent a few nights playing around with watercolors. It was a fun experiment but I wasn’t happy with the results.

I found a few stock photo websites that had suitable watercolor feathers but they didn’t have a story associated with the painting, that the photos on the face of the cards did. Instead of using stock images, I made a call-out on my social networks looking for watercolor artists that had experience with nature and birds. I got 20 responses quickly and was able to find a person that I was happy with.

I worked with Sal Beck to design a feather design that I liked. She even sent me the original painting. I like that this painting has a story, it adds some flavor to the whole project.

I got my first print of the deck of cards using version 2.6 and they turned out okay. A bunch of things immediately jumped out to me. 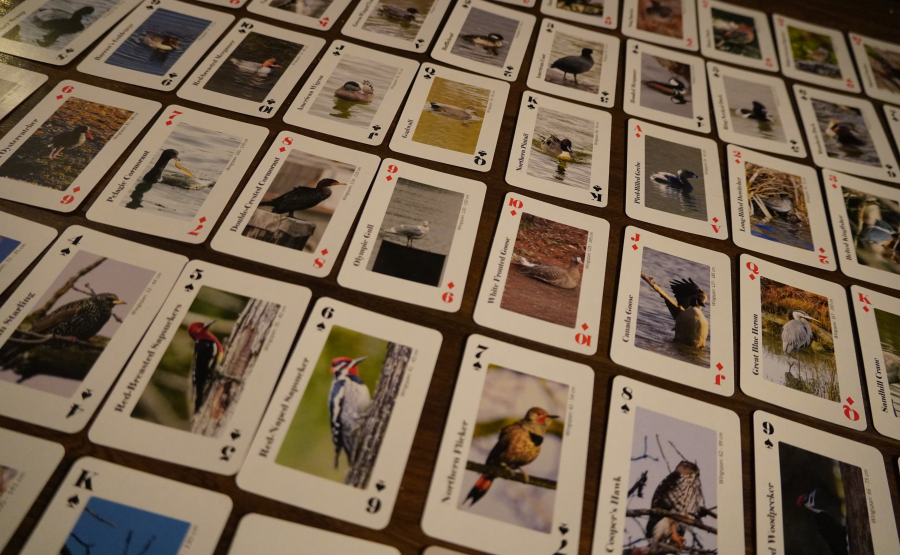 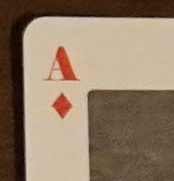 The suite and rank are too small - The suite symbol could be at least 40% larger. it looks dwarfed compared to the rank. 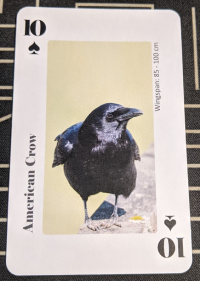 The cards are smaller than normal cards - I used “poker” size cards and didn’t realize that they are slightly smaller than regular playing cards. “Casino” size cards are the “normal” size cards. Redesigning the cards for a new template will be a lot of work, but being able to use this deck with another deck seems important. 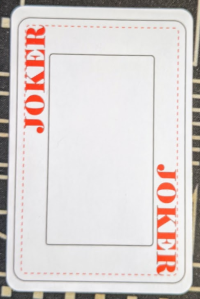 Glossy finish - In this version, I used a normal matted finish, I should have used a glossy finish it would have made the photos pop.

The template did not match the actual cut cards - This was disappointing to find out. The template provided didn’t match what I was expecting. 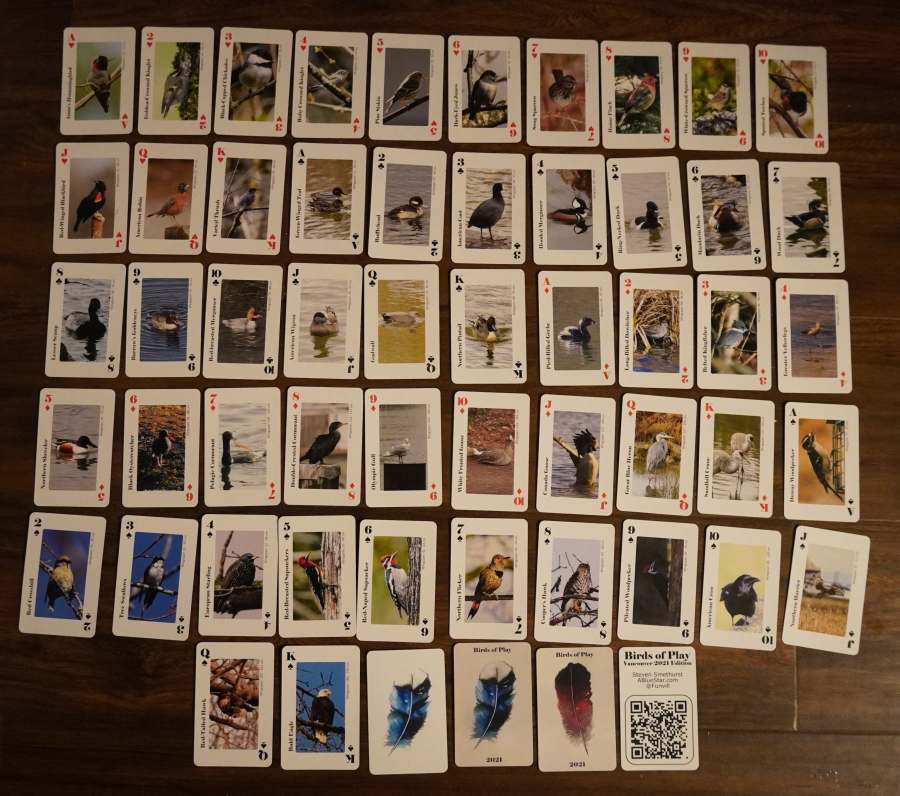 Changes in this version after reviewing the printed 2.6 version.