Between these three services I can get a pretty good picture of where I have been over the year.

I was reading The Map as Art by Katharine Harmon and saw this map created by Katie Holland Lewis called Tangled Pathways. Her map was created by mapping the points on her body that provided her with sensations such as pain, and stringing these points together into a map of her experience. Her work gave me the inspiration me to create this project. 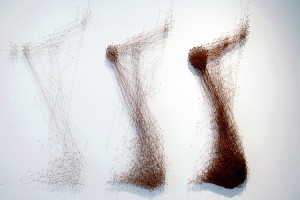 First I created a wooden map of Vancouver using open data provided by the City of Vancouver open data catalog. I used the location data that I have been collecting over the year and some small nails to pin point all the points on the map that I have been. I then took some thread and followed the path between these locations as I traveled over the city each day. Most days I would start at my house and travel between 5 or 6 different locations before heading back home for the night. This create a heat map of the city with thread. My home, work, and workshop (Vancouver Hackspace) quickly became dense with thread as the most frequent places I visited. Other entertainment districts also became defined on the map

At first I tried to use Yarn between all the points, but the yarn was too thick and after a month I wasn’t able to add any more threads to my home or work locations. I ended up cutting out all the yarn and starting over again.

The picture below shows the first three months of data using thread. I used a different color for each month. You can see that my home, work, and workshop are heavily covered in thread. 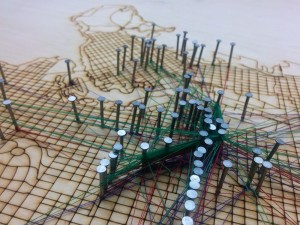 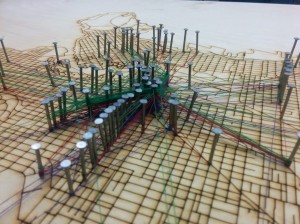 I ended up submitting this idea to the Maker Labs art show on July 4th, 2014 and got accepted. This is my first real art show that I have ever participated in and I am very excited about it. RSVP for the art show here.