App inventor for android was just recently released for everyone to play with. I looked in to it hoping I could create a simple EveryDayFiction feed reader app but it doesn’t seem to support Get RSS feed just yet.

So I created a simple sensor reading app that reads all the sensors on the phone and displays them raw to the users. (Note the sensors are all zero because its running in emulation)

The App inventor is a pretty simple programing IDE, it would work great for kits as its simple enough for them to understand and it gets stuff to the screen fast.

A few missing features that i was wishing for while building this app.

Interesting idea, but I don’t see to many people making killer apps with this software. 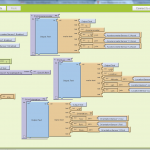