My father loves skulls and every year I get him a skull for Christmas. A few years ago I got  him a bottle of Crystal Head Vodka.  The vodka was concieved by actor Dan Aykroyd and artist John Alexander with an excellent video ad. 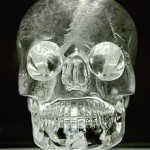 The crystal skulls are a number of human skull hardstone carvings made of clear or milky quartz, known in art history as "rock crystal", claimed to be pre-Columbian Mesoamerican artifacts by their alleged finders; however, none of the specimens made available for scientific study have been authenticated as pre-Columbian in origin. The results of these studies demonstrated that those examined were manufactured in the mid-19th century or later, almost certainly in Europe.[1] Despite some claims presented in an assortment of popularizing literature, legends of crystal skulls with mystical powers do not figure in genuine Mesoamerican or other Native American mythologies and spiritual accounts

This year I am going to cut a Crystal Skull by laying acrylic slices on top of each other. The skull model came from 123dapp.com and cut on VHS’s laser cutter. Since the acrylic is clear it makes it really hard to get a good picture. 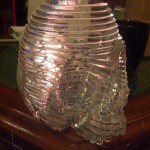 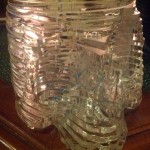 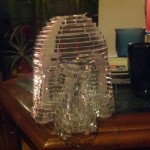 The images only show the top half of the skull. the bottom half is much more detailed including teeth and will require a lot of work to put it together.

One of the problems is that the acrylic that I used is 1/4th of an inch. instead of 3/16th cardboard that the original model called for. This caused the head to be elongated and distorted a little bit. The skull still looks great but it could be better. The acrylic sheet costs about $80.