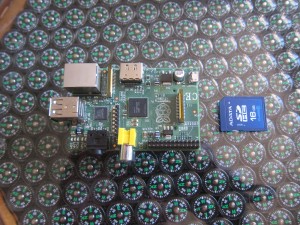 I got a RaspberryPI a few months ago, but with Vancouver Maker Faire and the 281 proposal and all the other things going on in my life I just never got around to playing with it.

What"s a Raspberry Pi? The Raspberry Pi is a credit-card sized computer that plugs into your TV and a keyboard. It"s a capable little PC which can be used for many of the things that your desktop PC does, like spreadsheets, word-processing and games. It also plays high-definition video. We want to see it being used by kids all over the world to learn programming.

Think an Arduino with a lot of extra CPU power, display and a few extra features. The Raspberry is not open source unlike the Arduino.

If you just look at the specs of the Raspberry PI and nothing else its not that great of a board. A BeagleBoard xM is much more powerful, more options and better track record. What makes the Raspberry PI special is its price tag of $35. At that price I don’t mind embedding it in side of a project and just leaving it there working away in the background. At that low of a price tag it becomes a very useful board for many projects that are just out side of the range of the Arduino. 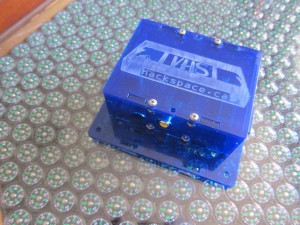 While at Vancouver Maker Faire I was talking to solar robotics and they gave me a copy of their Raspberry PI Safes with the VESA mount. Its a pretty nice enclosure for the Raspberry PI. The board moves around a little in the container but this seems to be a common problem as the Raspberry PI board does not have mounting screws.

This case will work for development but if you want to use the board in any building permanently or an industrial building you are going to need a enclosure that is UL and CE certified. Currently it looks like no one has produced one, probably because the certification costs upwards of $20k if you get it right on the first try. It also looks like the Raspberry PI company is not going to be making cases either. $20k is not too far out their but you would need to sell $50k in units to make it back and currently there is just too much uncertainty about the product to be investing in that.

I have a few projects in mind for the Raspberry PI.