A good place to start is the Raspberry PI quick start guide This will describe the different components on the board and what they can be used for.

For this tutorial we will be using the Raspbian OS. Raspbian is an unofficial port of Debian Wheezy and has been specifically modified to work with the Raspberry PI. Its also part of the NOOBS image provided by the Raspberry PI team.

Connecting to your Raspberry PI with SSH (running headless)

By default the Raspbian OS comes with SSH enabled. This allows us to run the Raspberry PI without a monitor or keyboard (headless) and connect to it from another computer (our laptops) remotely.

If you are on windows you can use Putty ( http://www.putty.org ) as your SSH client. MAC and Linux both have built in SSH clients.

The default username is pi and the password is raspberry

The instructions on AdaFruit’s website are straight forward with plenty of pictures.

Raspberry PI and the GPIO pins 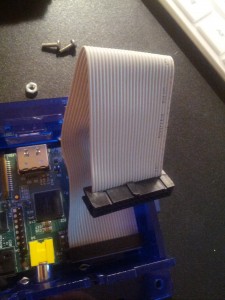 The Raspberry PI has a 26pin mail connector that connects to its GPIO pins. These ribbon cables and breakout boards can be found on adafruit.com ($2.95) and Sparkfun ($2.95)

Since I am using bitbucket all my source code is public. I created a few learning scripts to understand how the GPIO pins work on the Raspberry PI. The first script I made was a simple blinking LED, just like the arduino blinking LED script. Next was to read the current state of a switch and print the results to the screen.

This script will blink a LED ON and OFF again.