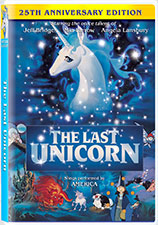 This February, Lionsgate Entertainment celebrates the 25th anniversary of a true classic, The Last Unicorn, featuring an all-star cast of voice talent and songs performed by the band America. Starring the voices of Mia Farrow (Rosemary’s Baby), Christopher Lee (Lord of the Rings, Star Wars) and Academy Award¡¦nominees Angela Lansbury (TV’s “Murder, She Wrote”) and Jeff Bridges (The Big Lebowski), The Last Unicorn: 25th Anniversary Edition DVD tells the tale of a unicorn who sets out on an extraordinary quest to find her lost brothers and sisters. Based on the novel by Hugo-Award winning fantasy author, Peter S. Beagle, this long-awaited special edition DVD is available for the first time in the United States in a widescreen version. It brings the film to life in its highest quality ever, with digitally remastered audio and video, and new foil-printed slipcase packaging (not shown in the photo above).

THIS DVD EDITION IS APPROVED BY PETER S. BEAGLE. MORE THAN HALF THE PURCHASE PRICE GOES TO SUPPORT HIM AND HIS WORKS. (Note: if you buy it elsewhere, he still isn’t getting anything at all. See www.conlanpress.com/youcanhelp for more information.)

ALL PURCHASED COPIES WILL BE AUTOGRAPHED IN THREE PLACES: THE DVD, THE DVD COVER, AND THE DVD SLIPCASE.