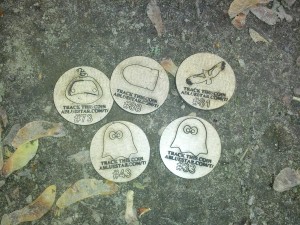 I recently went on a trip to New York for the World Maker Faire. My plan was to make a bunch of wooden nickles that resembled Geo Coins and put them in several different Geo Caches across New York and Toronto.

The problem was that ALL of the caches that I tried to find in New York where either missing or micros. It looks like Manhattan was a very poor place to go Geo Caching. I only went to 10 different caches before I ended up giving up. I was not able to place any trackables in any Geo Caches in New York. 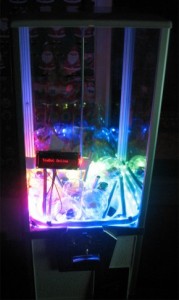 I did give a few of the wooden nickles to one of the makers at Maker Faire. He developed a toy vending machines with trackable capsules and was looking for things to put in to the capsules.

Adventure Box is a project that creates a magical and inventive experience inside of a custom built intelligent toy vending machine filled with unique toys and enough techno-wizardry to bring the machine to life with lights, sounds, and lots of Adventure! http://makerfaire.com/pub/e/9160

After New York I traveled to Toronto for three days to visit some friends. I found many more Geo Caches big enough for my wooden nickles and generally had a much better time Geo Caching. 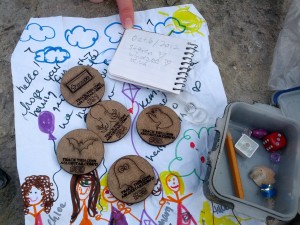 Some of the coins have started to get comments on the tracking site but most of them remain blank. It has only been a few weeks so I am still hopeful, but I think the extra effort of going to my website puts most people off from recording the new locations of the Geo Coins.

I am going to run a Info session on Geo Caching at the Vancouver Hackspace on Tuesday 16th Oct, 2012 where I will get to meet a lot of the other local Geo Cachers in my area. I hope to learn a lot from them and maybe I will revisit this project again with some new ideas.