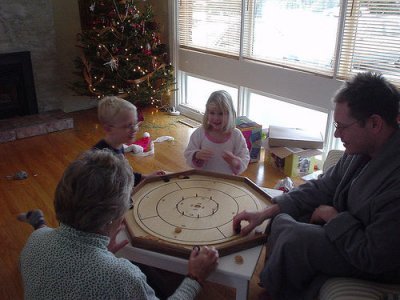 Crokinole (pronounced croak-i-knoll, /ËˆkÉ¹okÉªinol/) is one of the most memorable childhood games that I use to play with my family. Its basically miniature table top curling board but fun (unlike real curling).

There are Crokinole clubs and tournament’s in many major cities that met regularly and tons of books on the subject, even movies, but its still not a widely known game. Most people I talk to have never heard of it or seen anyone play it before.

The earliest known Crokinole board was made by craftsman, Eckhardt Wettlaufer in 1876 (not 1875 as previously reported) in Ontario, Canada. The first registered American patent suggests 1880 as the time when commercial fabrication began - first in New York, then Pennsylvania. The game was probably adapted from a16th century British game called shovelboard. Some people believe that Crokinole was an Mennonite or Amish game this is untrue. Yes, Crokinole has been very popular among many Mennonite and Amish sects throughout Canada because of the fact that the game was viewed as a rather innocuous pastime-unlike the perception that diversions such as card playing or dancing were ‘works of the Devil’as held by many 19th century Protestant groups. Also Eckhardt and his ancestors were Lutherans, not Mennonites.

What you need to play

How to play the game

The rules for Crokinole are well defined and can be found on the World Crokinole championships website.

Crokinole is most commonly played by two players, or by four players in teams of two, with partners sitting across the board from each other. Players take turns shooting their discs from the outer edge of their quadrant of the board onto the playfield. Shooting is usually done by flicking the disc with finger, though (rarely) small cue sticks, like those that would be used for billiards may be used. If there are any enemy discs on the board, a player must make contact, directly or indirectly, with an enemy disc during the shot, If unsuccessful, the shot disc is ‘fouled’ and removed from the board, along with any of the player’s other discs that were moved during the shot. When there are no enemy discs on the board, many (but not all) rules also state that a player must shoot for the center of the board, and a shot disc must finish either completely inside the 15-point guarded ring line, or (depending on the specifics of the rules) be inside or touching this line. This is often called the ‘no hiding’ rule, since it prevents players from placing their first shots where their opponent must traverse completely though the guarded center ring to hit them and avoid fouling. When playing without this rule, a player may generally make any shot desired, and as long as a disc remains completely inside the outer line of the playfield, it remains on the board. During any shot, any disc that falls completely into the recessed central ‘20’ hole is removed from play, and counts as twenty points for the owner of the disc at the end of the round. Scoring occurs after all pieces have been played and is differential: the player or team with higher score is awarded the difference between the higher and lower scores for the round. Play continues until a predetermined score is reached.